I do really enjoy strolling around in a city and discover the places with a sketchbook.

Originally I wanted to visit Westminster Abbey but when I arrived it was already closed. Since it started to rain I took shelter in the next church close by, St. Margarets. When I approached the altar I realised that in this very church the book of condolences for Margaret Thatcher were on display.

So I started to sketch the people when I was approached by a security guard:

»Are you sketching?«
»Yes, something wrong?«
»No everything is a.ok. I am just always fascinated by people who sketch and capture a moment with a pen. May I see it, when you’re finished?«
»Of course.«

In the end we have a really nice conversation about sketching and about body language. Some people we observe seem to be really touched, some look just out of pure curiousity and others obviously write funny comments in the books, because they start to giggle. 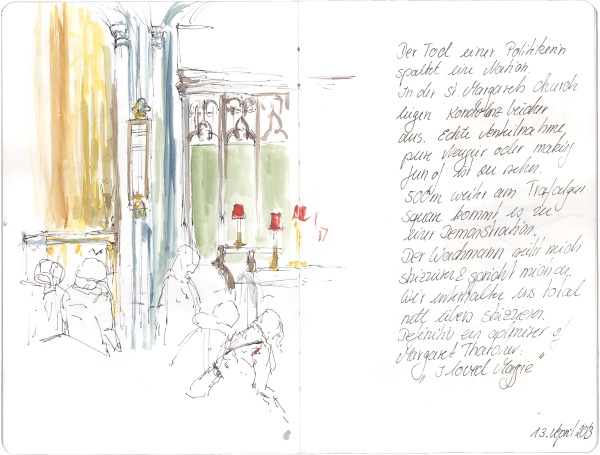 The next day I sat in the Great Cloister at Westminster Abbey. The sun enlightened this place, and while sketching the air was filled by the music of a choir and organ.